In selecting the team members, we consciously chose complementary education and experience profiles to match the broad set of skills and qualifications required for this line of work. As a result, the MBR is professionally prepared for the diverse challenges of the urban space in terms of both content and methodology. Each team member is specialised on (a) specific district(s) of Berlin.

The history
of the MBR

Mobile since 2001
The MBR’s 20-year anniversary

Most right-wing extremists were still wearing combat boots, the fall of the Berlin Wall had only just resulted in a restructuring of the districts and the word racism was avoided at all costs in public discourse: 2001 feels like it was in another era.

It was precisely in this year that the MBR began its work. The year 2001 also marks a turning point in the state-funded confrontation with right-wing extremism and other ideologies of inequality: a shift away from a far too sympathetic treatment of right-wing offenders, intellectual arsonists and enemies of democracy – to support of all those who wish to combat it.

Right-wing extremism, right-wing populism, racism and anti-Semitism have never developed in the “fringes” of society. They are born from its midst. As a result, our work follows the conviction that the threat from the right can only ever become as dangerous as we allow it to become. The respective spaces for these developments in a city such as Berlin are numerous and exist in all nooks and crannies, which is why even seemingly minor activities and actions in everyday life and in civil society can have a major or even significant impact.

In the last 20 years, we have advised, supported, connected and trained many thousands of Berliners by either focusing on their needs and issues or in accordance with our own approach of “observation – interpretation – action”. We consider the joint objective of our work a success if we are able to help people in becoming more confident in their actions and their rhetoric. Our measure of “success” is therefore based on the success of our clients.

For 20 years, we have been working toward making our work superfluous. However, right-wing hostility directed at members of the civil society in the parliaments, an uninhibited centre that protests together with right-wing extremists, an unsolved series of attacks in Neukölln – commitment to a democratic culture remains as necessary as ever in 2021.

There are currently no vacancies available.

The MBR offers internships in the area of PR as well as
in consulting and process support in the Berlin districts.

Depending on interests, knowledge and current needs, interns may set their own priorities in the various fields of work at the MBR:

Students enrolled in the following degree programmes can have their internship recognised according to the stipulations of their respective programmes: social work/social pedagogy, education science, psychology and political science. Applicants should independently clarify the existing prerequisites with their respective university/university of applied sciences prior to commencing the internship.

Applicants should please send a cover letter detailing their motivation, knowledge and skills, interests and, where applicable, experience in the working fields of the MBR, their desired internship period as well as a tabular CV (no more than one page each) to: praktikum@mbr-berlin.de.

Towards a human rights-based democratic culture in Berlin

Successful and sustainable projects are inconceivable without the support of a strong association. The MBR’s umbrella association, the Verein für Demokratische Kultur in Berlin – Initiative für urbane Demokratieentwicklung (VDK) e.V. (Society for a Democratic Culture in Berlin) was founded in August 2003 by representatives of various civic organisations and initiatives. The guiding principles of the VDK e.V. are motivated by a human-rights based democratic culture as the fundamental alternative to right-wing extremism, right-wing populism, racism, anti-Semitism and other sentiments of inequality. The democratic commitment of the VDK projects MBR, RIAS Berlin, Berlin against Nazis and Regishut is demonstrated both in their everyday practical work on location and in their valuable contributions to the political discourse on how to deal with right-wing extremism, right-wing populism, racism and anti-Semitism. The standards developed by the projects often have a signalling character in this tense subject area, both locally and at the state level. The VDK e.V. supports its long-standing projects and sends an essential political signal for united, committed and human rights-oriented coexistence in Berlin.

Our association is recognised as a non-profit organisation. Your donation is tax-deductible. If you require a donation receipt, please send us an email. 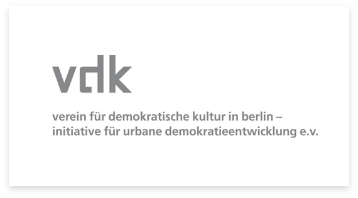 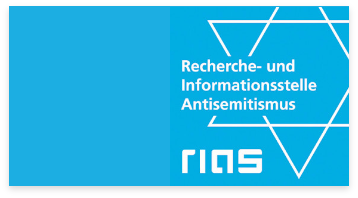 The  Recherche-und Informationsstelle Antisemitismus Berlin (RIAS Berlin) (Research and Information Centre on Anti-Semitism) was founded in 2015 as the first German civic point of contact for victims of anti-Semitism. Since then, RIAS Berlin has developed a city-wide reporting network for anti-Semitic incidents. Anti-Semitic incidents can be easily reported directly to the project via the platform report-antisemitism.de or the reporting hotline 0152 13 36 21 98. The documentation and evaluation of anti-Semitic incidents make it possible to draw the
attention of politicians and the public to anti Semitism, to sensitise the police, judiciary and administration to current manifestations and to develop starting points for civic action. 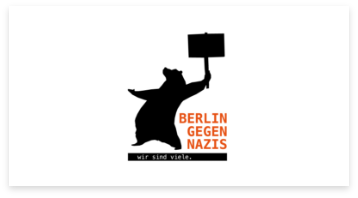 Berlin gegen Nazis offers a platform for civil society action against right-wing extremism, racism and anti-Semitism in the city: the social media channels and the GEGEN NAZIS app provide reliable information about extreme right-wing, racist and anti-Semitic gatherings and make the diverse counter-protests and decisive positioning of groups and individuals visible. The broad Berlin
gegen Nazis network of partners from culture, associations and business enables sustainable positioning both internally and externally and connects the actors in the city to enable joint action.
https://berlin-gegen-nazis.de/

The model project Regishut – Sensibilisierung zu Antisemitismus in der Berliner Polizei (Raising Awareness of Anti-Semitism in the Berlin Police Departments), launched in July 2020, is aimed at members of the state police. In particular, middle and senior civil servants are informed about current manifestations of anti-Semitism in special training courses and sensitised in terms of how to deal with those affected as well as to civil society perspectives. The common goal is thus to improve the prosecution of anti-Semitic crimes and to increase the protection of those affected.
regishut@vdk-berlin.de

You can reach us at
info@mbr-berlin.de