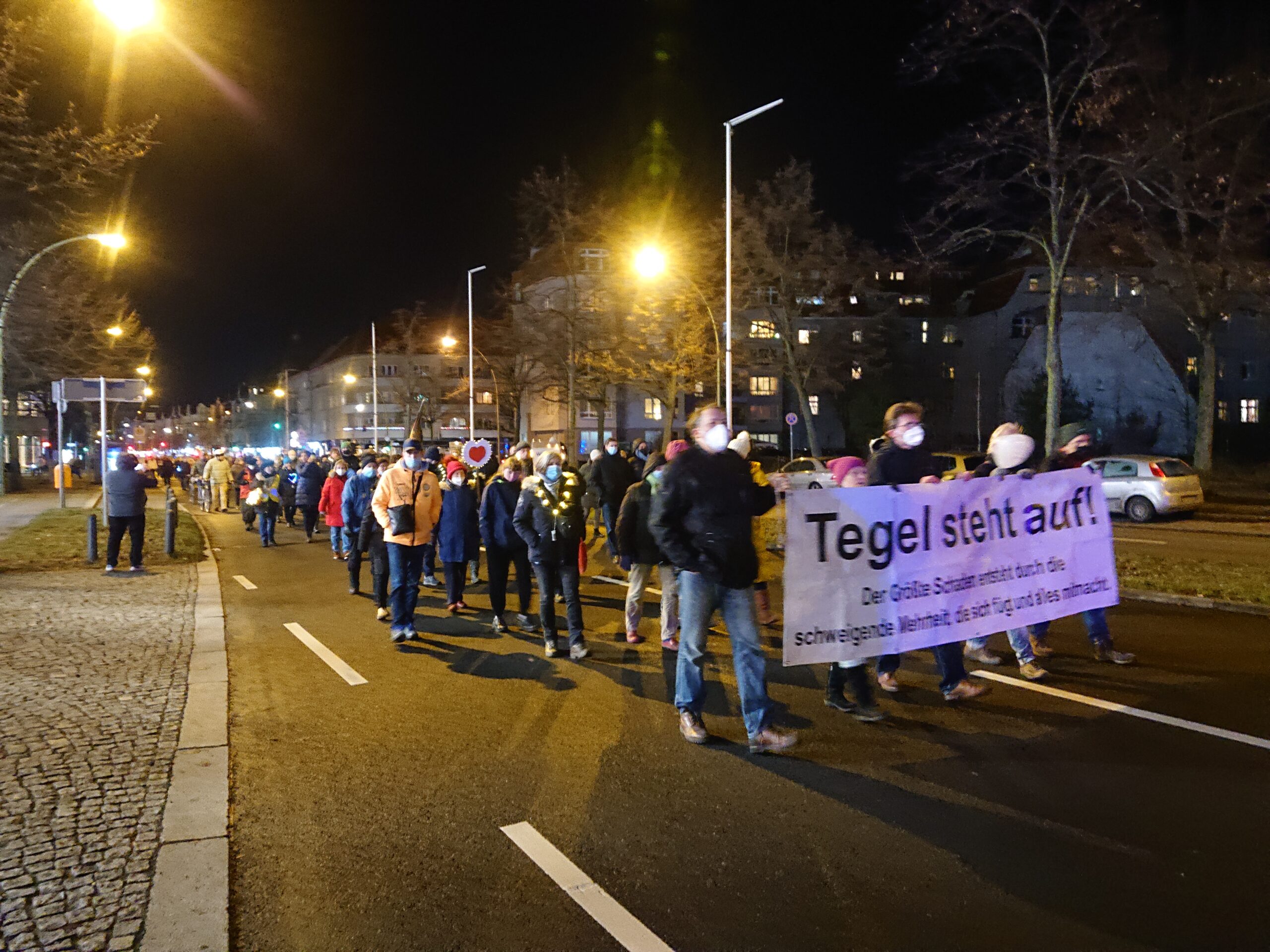 After supra-regional gatherings of the conspiracy-ideological pandemic denier scene in Berlin had died down by the end of 2020, and with low mobilisation dynamics throughout 2021, the remaining protest scene reawakened at the end of 2021. The reason for the stagnating number of participants in 2021 was above all the withdrawal of national structures such as “Querdenken” (lit. lateral thinking) from organisation of the protests. Various actors attempted to fill the resulting vacuum. The first decentralised “walks” took place in Saxony in November 2021 and spread through Germany shortly after. The new dynamics were presumably triggered by the additional tightening of government-mandated protection measures, in particular the associated debate surrounding compulsory vaccinations and increasing social pressure on unvaccinated individuals. Most recently, between 5000 and 6000 people participated in various registered and unregistered gatherings in Berlin.
In comparison to registered gatherings, “walks” as a form of action have a much lower participation threshold. At the same time, the moment of self-exaltation, which is important for the internal effect, can be celebrated together. Every instance of non-compliance with the pandemic protection measures is presented in great detail as an act of resistance in the corresponding Telegram groups and honoured by the readers. The joint “rule-breaking” of going out on the streets unannounced on Mondays and without mouth-nose protection or distancing in sometimes large groups evokes a feeling of being part of an important and large protest movement among the participants. Therefore, these mobilisation efforts exhibit a new attraction for the protest scene, which has recently been difficult to motivate in Berlin. In the face of these new developments, the question arises as to who is taking part in these “walks”.

Heterogeneous scene
The people who join the “walks” are extremely heterogeneous and seem to be differently motivated. The spectrum covers anti-vaxxers, alternative and esoteric scenes, followers of the Lebensreform movement (lit. life-reform), participants in the “Monday vigils for peace” as well as QAnon believers. But Reichsbürger_innen (German sovereign citizens), AfD politicians and “traditional” right-wing extremists such as NPD or III. Weg activists are also regular and accepted participants, albeit in smaller numbers in Berlin than in the rest of Germany. Conspiracy narratives, anti-Semitism and anti-elitism are the ideological brackets – the participants see themselves as true representatives of the “people” or, in the case of the Reichsbürger_innen scene, as legitimate sovereign citizens. Accordingly, the openness and lack of demarcation toward the political right at the “walks” also contributes to a normalisation of right-wing extremist content.
The “walkers” are concerned with staging an outrage of the social “mainstream”. Various strategies are applied to achieve this objective in Berlin. For example, they call for the renunciation of all political symbols after critical media coverage led to a demonstrative distancing from a gathering organised by supporters of the extreme right-wing “Patriotic Opposition Europe” in Berlin-Mitte. However, different strategic considerations and (personal) disputes among the respective organisers seem to be at the forefront of the renunciation. There are also attempts by the organisers of the “walks” to centralise the protests and thus expand them. For example, the well-known Berlin actors of Demo-Tour and Freedom Parade were significantly involved in the gatherings of “Friedlich Zusammen” (lit. peacefully together) and organised a protest on 31 January 2022 under the motto “Care stands up”. That this is a deliberate strategy to affect social breadth and insinuate legitimacy of the protest can be seen in the discussions of the digital structures of “Berlin steht Auf / Free Berliners”, which are decisive for the “walks”. The social media channels relevant for communication and networking were created and are managed by former Querdenken activists.

External image seems to be apolitical
The fact that the “walks” currently use few banners and signs does not therefore mean that they are apolitical gatherings. Even chants such as “Peace, freedom, self-determination”, “We are the people” or “Peace, freedom, no dictatorship” do not necessarily represent a commitment to democracy. The analyses and media reports on the protests regularly highlight the difficulties in politically classifying the circulating narratives – also because right-wing extremist and conspiracy ideological actors consciously influence conceptual reinterpretations and introduce them into the protests. An example of this is the historically relativising appropriation of the terms “resistance” and “freedom”, which are applied to an alleged “Corona dictatorship” that is accused of depriving people of their basic rights. At the same time, own positions are deliberately left open to interpretation on the “walks” by using slogans such as “No dictatorship!”. The narratives are deliberately kept vague in terms of content and thus offer a broad capacity for connectivity and mobilisation. The general rejection of government-mandated measures becomes connectable to different, even mutually incompatible political ideas and is open to völkisch-nationalist argumentation. In addition, it creates points of connection to anti-democratic attitudes in the so-called social mainstream.
The participants experience tremendous self-empowerment, self-elevation and self-efficacy during the “walks” without masks and distancing, often accompanied by the feeling of being part of the “resistance”. The atmosphere at the “walks” often feels like a fun event. Participants bring fairy lights, heart-shaped balloons and bells, they play drums and music and march through the districts with songs playing like “Talking about a Revolution” by Tracy Chapman. And apart from the aforementioned chants and slogans, hardly any content is actually visible. All these things become easier if the police let the participants go ahead with their “walks”, even if they are disregarding the pandemic-prevention rules. What is conspicuous is that police approaches differ according to district. While the “walkers” in Tegel, for example, were hardly reminded of the obligation to wear masks on 31 January 2022, the police in Köpenick repeatedly drew attention to the Protection against Infection Act and in some cases closed off streets on 17 January 2022.

“Antidemocratic base potential”
In 2019, the Berlin-Monitor already showed an openness among Berliners toward conspiracy narratives. It became clear that many Berliners suspect a conspiracy behind the processes of a pluralising society, as shown by the high approval ratings for the statement that “politicians and other leaders are only puppets of the powers behind them”. In 2021, conspiracy narratives related to the coronavirus pandemic were also recorded for the first time. Approximately 20% of Berliners agreed with the statement: “the coronavirus crisis was exaggerated so that the few can benefit from it.” This high figure shows how many people in Berlin are receptive to conspiracy narratives.
The examinations of the “walks” so far largely confirm the findings of various attitude studies, according to which there is a constant anti-democratic base potential in the middle of society. The current gatherings activate and mobilise no more – but also no less – than this potential. It is of central importance that we clearly distinguish what is democratic criticism, what is instrumentalisation of criticism by anti-democrats and what are simply absurd conspiracy narratives. And this also applies to the classification of the “walks”.